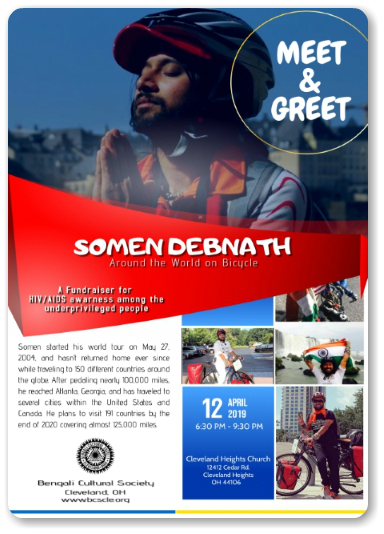 
The Bengali Cultural Society of Cleveland (BCS) would like to extend an invite to its event, Meet and Greet with Somen Debnath, between 6.30 PM – 9.30 PM, Friday, April 12, at Cleveland Heights Church (former ICC Building), 12412 Cedar Rd., Cleveland Heights, OH 44106.

We encourage you to make generous contributions towards Somen’s noble feat. Donations small or large can be made out via check to The Bengali Cultural Society of Cleveland and all proceeds will be donated to Somen’s charity. We won’t let you go back empty handed of course! Along with providing snacks and refreshments, get to hear Somen’s ‘captivating’ stories from faraway lands he visited. We say that because he was literally captured by Talibans in Afghanistan with the cost of his freedom being chicken curry!!!

Don’t believe us? Then come and meet Somen on April 12 and hear him share his intriguing stories of Afghanistan and other enchanted lands!

Somen has been covered by leading publishing houses across the globe. To know more about him and his exploits, you can refer to the following links: